Our S&DRA team have joined forces with Shepwayvox to bring you the latest article set out below. The biggest question to ask yourselves is: If Otterpool Park is for local people, why does Westenhanger station need to be developed into a Parkway Station, ferrying Otterpool residents to London at high speed? Moreover, If (and it's a big 'if') Westenhanger does eventually serve the utopian dream of Otterpool Park, property prices will increase to suit the London market. So, is it disingenuous for Monk, Hollingsbee, Collins and Co to tell us that these are houses being built for our children and grandchildren? It doesn't take a lot of working out.........S&DRA.

Just Yesterday, our Man About Town, (London Town) Damian Collins MP, spoke about Network Rail in his weekly column, in the Folkestone Herald. One of his pet projects which he endeavoured to write about back in Oct 2014 was Westenhanger Station  (pictured) and how he wanted to turn it into a Parkway Railway Station.

Now Otterpool Park is not just about houses, water in and out, or doctors, it is about the redevelopment of Westenhanger Station too.

As a result of a Freedom of Information (FOI) request submitted to Network Rail (NR) it has become clear that Shepway District Council (SDC) have for some time been in contact with NR about upgrading the facilities at Westenhanger Station to support Otterpool Park.

And as far as we can see, SDC had their first meeting with Network rail in Oct 2016, as can be evidenced in this document  → Shepway – NR Duty To Co-operate

More importantly, amongst the documents provided by NR, there are two key pieces of information:

A draft Scope of Work that NR would undertake for SDC;

An outline timescale of the proposed Scope of Work, all relating to Westenhanger Station. 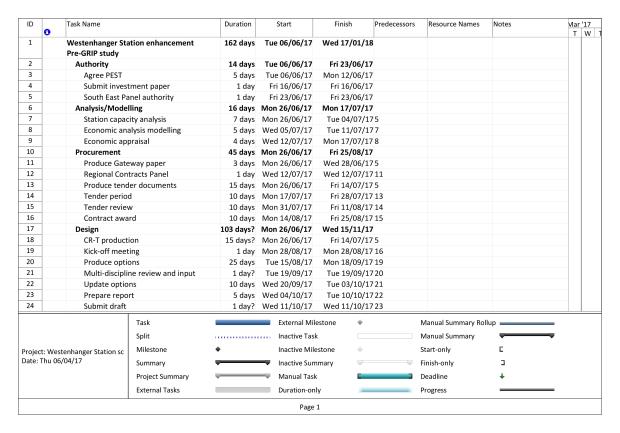 Although work appears to be well in hand – the timescale shows a "kick-off" meeting on 28 August – Just 10 days away, the FOI response covering letter indicates that SDC have not yet contracted NR to undertake the work, so things may not be progressing to plan.

The important thing to understand is that this is preliminary work, an initial feasibility study which will then be submitted to the Department for Transport for approval. It will be one among many and the success rate is not great, but we are sure with the Reuben Brothers behind it, along with Damian, approval will be a walk in the park.

All of the above aligns with Shepway's MP's views, expressed in his article back in Oct 2014 as we said earlier.

If Otterpool Park is local housing and local jobs, why is a High Speed link to London needed?

What would be the future for Folkestone stations?

Posted by Sellindge Residents at 14:03

An update from last Saturday's demonstration:

"The demonstration against further development on Fisherman's Beach was supported by well over 100 Hythe residents and many others from outside the area. All 250 leaflets urging people to write to Ben Geering, Chief Planning Officer, objecting to the proposed additional apartment block were taken up, half of them by people visiting the Beach and filling the seating outside Griggs and tucking into a meal.
When we explained what all the fuss was about people were very angry to think that the despoliation of the Beach was planned to go further and even more so when we told them of SDC's continuing pressure to get rid of the Fishermen.
A copy of the leaflet appears below and we urge you to write asap to Ben Geering objecting in the strongest possible terms to the additional apartment block - eg 'What the hell do you think you are doing to our Beach and the Fishermen!'
Any one reading this and visiting the Beach should take a look at our Association Noticeboard which stands next to the large Fishermans Hut immediately opposite the main Lifeboat House containing Griggs Fish Shop.
Finally a big thankyou to all of you who turned up on Saturday – and don't forget to write to Ben Geering! 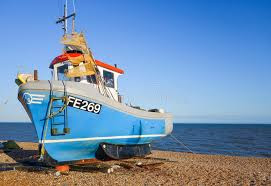 We ask you to support our campaign as reported on Pages 2 & 18 of this week's Folkestone and Hythe KM Express by writing as soon as possible to SDC Chief planning Officer Ben Geering at Shepway District Council, Civic Centre, Folkestone CT20 2QY objecting in the strongest terms to Application: Y17/0654/SH 'for the 'erection of three storey apartment block with undercroft parking.'

RESIDENTS REVOLT OVER HUGE INDUSTRIAL PLANT ON THEIR SEASIDE DOORSTEP. 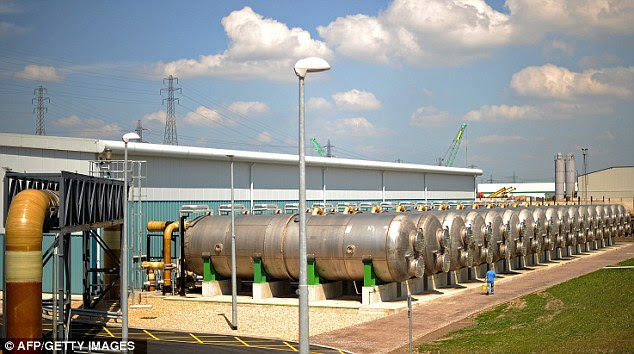 Residents of a Kent seaside Town are outraged by a planning application by a local water company to build a desalination plant next to their sleepy seaside Town. One resident said "There was no indication that we would be sitting next door to an industrial site when we moved here just 3 months ago". Other residents were more sanguine about the prospect of a plant of this size on their doorstep, commenting "It stands to reason that if the population is increasing in this area, we would need more water to supply all households".
A Water company spokesperson said: "With continuing dry winters, coupled with the population explosion in this area of over fifty percent, we have no choice but to seriously consider a system whereby we convert sea water into potable drinking water for all of our customers". When pressed to respond to local Fishermen's claims that the building of the plant would decimate the local fishing industry through the discharge of brine back into the sea, no firm reassurances were given, except to say that "it was in the early stages of planning and feasibility studies would follow".
A spokesman from the District Council commented: "We understand the residents concerns, but we are acting on behalf of all Residents, all over the district, not just in one area". Asked how he felt about the rise in water charges to provide water from the plant, he commented, "It's out of our hands. Charges are set by the water company and I have no input into any of that". The spokesman was asked if OFWAT could influence the rate of charge per megalitre used by each household. He retorted, "Off Who"

The headline and text above is a spoof, but it really isn't far away from an event that could take place. Already proposals to build desalination plants have been mooted around Hampshire and Sussex by Southern Water. It is no exaggeration that if the population in our area is set to rise by over fifty percent due to the District Councils' plan to build a New Town and more, totalling over 26,000 new dwellings, coupled with residents in the South East having less rainfall per person than those in Istanbul, it's just a matter of time before such a plant is upon us.

In 2010, a Desalination plant was commissioned in Beckton, East London to serve London in times of drought. These units are power hungry and are generally frowned upon by respected environmentalist's. The byproduct of these units is salt, which is discharged back into the sea, causing a saline imbalance. Needless to say, it will be detrimental to the local marine environment.

So, if you're one of those Residents who think they won't be affected by an increase in the population because you live just 5 or 10 miles away from a New Town? Time to think again.

Posted by Sellindge Residents at 10:20

The Morris family have very kindly offered to open their lovely garden for all to see. The property stands above Otterpool and offers excellent views across the area. A date for your diary and a worthwhile event to raise funds to halt the madness of an unworkable Lorry Park and Commuter Town of 12,000 unaffordable dwellings. 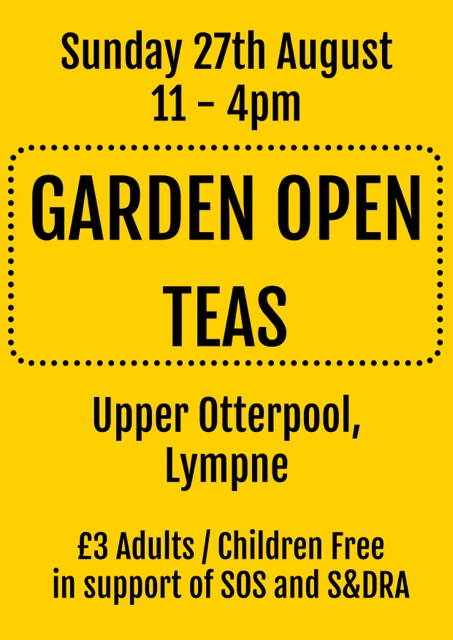 Come along and enjoy a nice cup of tea and a slice of cake.

The articles contained in this website are for general informational purposes only and have been provided by various sources including the public, newspaper content and local bodies. These articles are then presented by Sellindge & District Residents Association on this website, and while we endeavour to keep the information up to date and correct, we make no representations or warranties of any kind, express or implied, about the completeness, accuracy, reliability, suitability or availability with respect to the website or the information, products, services, or related graphics contained on the website for any purpose. Any reliance you place on such information is therefore strictly at your own risk. In no event will we be liable for any loss or damage including without limitation, indirect or consequential loss or damage, or any loss or damage whatsoever arising from loss of data or profits arising out of, or in connection with, the use of this website.

Through this website you are able to link to other websites which are not under the control of Sellindge & District Residents Association. We have no control over the nature, content and availability of those sites. The inclusion of any links does not necessarily imply a recommendation or endorse the views expressed within them.

Every effort is made to keep the website up and running smoothly. However, Sellindge & District Residents Association takes no responsibility for, and will not be liable for, the website being temporarily unavailable due to technical issues beyond our control. This website may include technical inaccuracies or typographical errors. The Sellindge & District Residents Association has no business relationship with any organisations mentioned in this website.

The village of Sellindge now faces:

Meeting with KCC on 24th June 2008 at the Village Hall